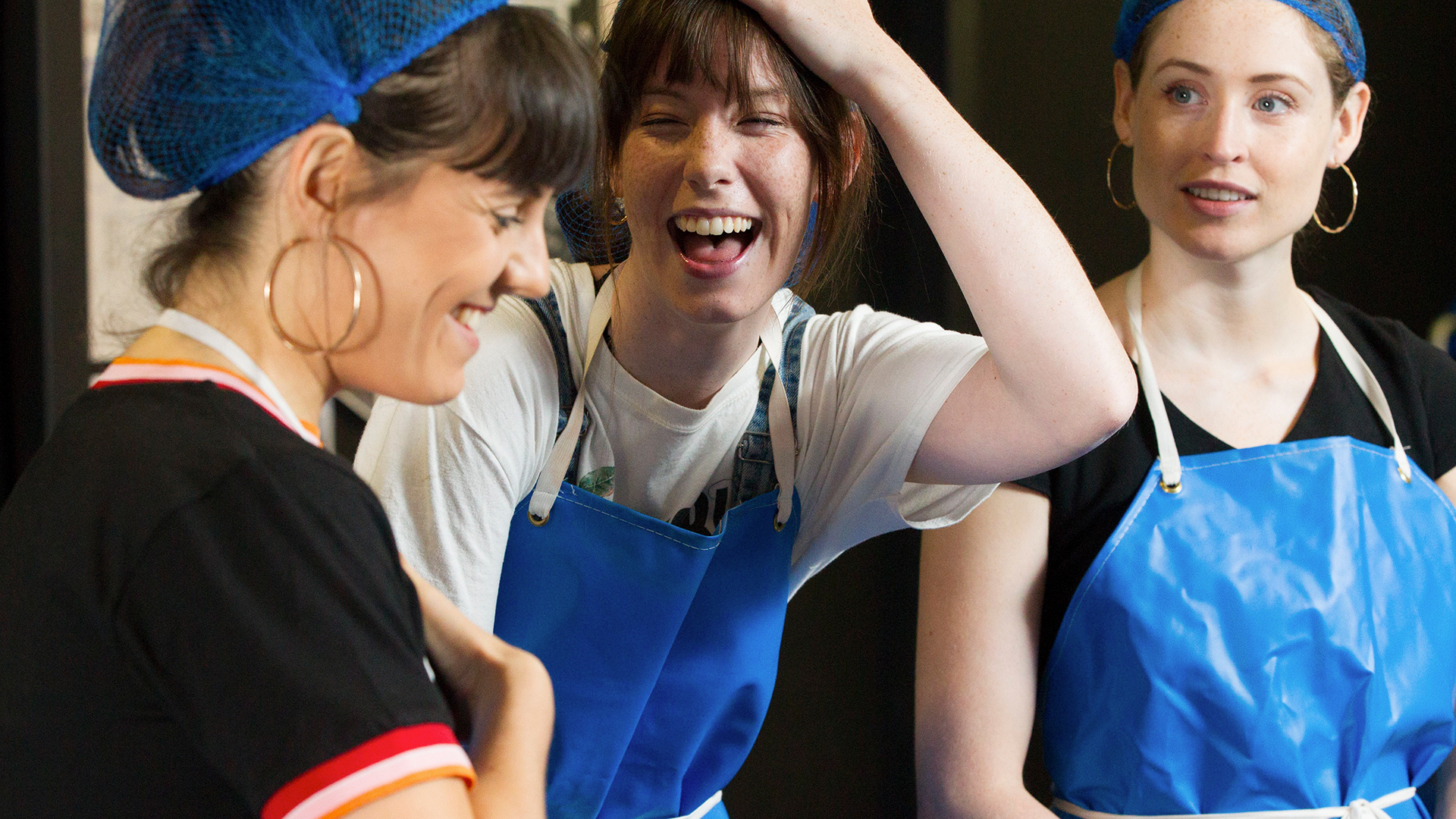 An Irish black comedy is coming to Watford this month as part of its autumn tour.

Gutted, by Sharon Byrne, will visit the Dugdale Centre in Enfield on Friday, October 25. Set in a 1980s Dublin fish factory, Gutted explores the lives of three strong women, played by Eleanor Byrne, Niamh Finlay and Sarah Hosford, with dark humour and tenderness.

Sharon Byrne draws on her Dublin upbringing to present the lives of three women working in a fish factory in the 1980s. Through comic monologue, the women present a snapshot of the characters and challenges in their lives at the time. Exploring themes of family, trust, love and loss, Gutted touches on issues of domestic violence and abortion, which remain as relevant today as they were over 30 years ago.

We sat down with playwright Sharon Byrne and director Chris White ahead of the show’s autumn tour.

What is the play Gutted about?

Sharon: Gutted focuses around three young women who work in a fish factory in Dublin in the 1980s. It explores their individual lives and the challenges they face, including themes such as domestic violence, family sexual abuse, teen pregnancy and abortion. Despite the issues though, it’s really fun. It’s black comedy.

What inspired you to write the play?

Sharon: The inspiration came from my childhood, growing up in Dublin. After my parents separated when I was about 11 or 12, I moved to my grandparents’ house, close to a fish factory in the north side of Dublin. I used to see the women walking back and forth to work in the morning and evenings – wearing blue coats, aprons, caps and wellies, smoking a roll-up and generally putting the world to rights. They were tough women but also admirable, and I thought to myself that would make a good play, explore their lives, their stories.

What can we expect from this production?

Chris: It’s a story of a night out. We spend an evening with them where they’re trying to escape the things that are clawing them, like having to clock in, work all day and clock off. This Saturday night, all three of them are hoping for a big experience, a Cinderella moment where something will change in their lives. And for each of them something happens but it isn’t necessarily the dream or the diversion that they were hoping for. As a result, they change their circumstances and – in a small way – take control of who they are and what’s going to happen next. Sharon really captures the essence of Dublin life through the idiom of the play. There’s singing and humour. Hopefully it’s like being in the same bar with them on a night out.

The play is set over 30 years ago – how do you think it finds relevance now?

Sharon: I think because the play touches on the issue of abortion, it makes it extremely relevant. The recent abortion rights campaign in Northern Ireland is so topical. And charities are campaigning to provide support for women and children in shelters who are suffering domestic violent situations at home. Chris has brought the play to life with his production. It’s very contemporary – not like it’s stuck in the 80s.

Tell us about the cast and what they bring to the production.

Chris: Eleanor Byrne, Niamh Finlay and Sarah Hosford are all Irish, and very motivated by the issues in the play. One of the dominant conversations in rehearsals last year, was the rape trial of the Ulster rugby players and the huge civic reaction it provoked – to not just that case but the prevailing culture where women are expected to be silent. Where women are cast as victims. And where women’s voices and identities are obscured. They were also very engaged with the abortion referendum the year before and spoke passionately about people in their family network that they loved but who felt differently to them, and the sense of division this created.

What would you hope an audience member might experience coming to see this play?

Sharon: Despite the issues, I hope they will laugh. I think Irish people have an inherent way of dealing with issues. We tend to laugh them off and that’s how we cope in Ireland, certainly in southern Ireland where I grew up. Although I’d like the play to be informative, I’d also like people to come away feeling enlivened, enriched, and joyful.

Almost 700 galleries, theatres, cultural institutions and sector workers have applied for help from the Mayor of London during the coronavirus pandemic. Enfield Independent | News …

A man has been arrested on suspicion of murder after a fatal stabbing. Enfield Independent | News …

London will move to Tier 2 local lockdown when national restrictions end next week – but local leaders have warned there is “no guarantee” the capital will avoid tougher rules in future. Enfield Independent | News …

Gyms and hairdressers will reopen across the whole of England when lockdown ends, the Prime Minister has said today. Enfield Independent | News …